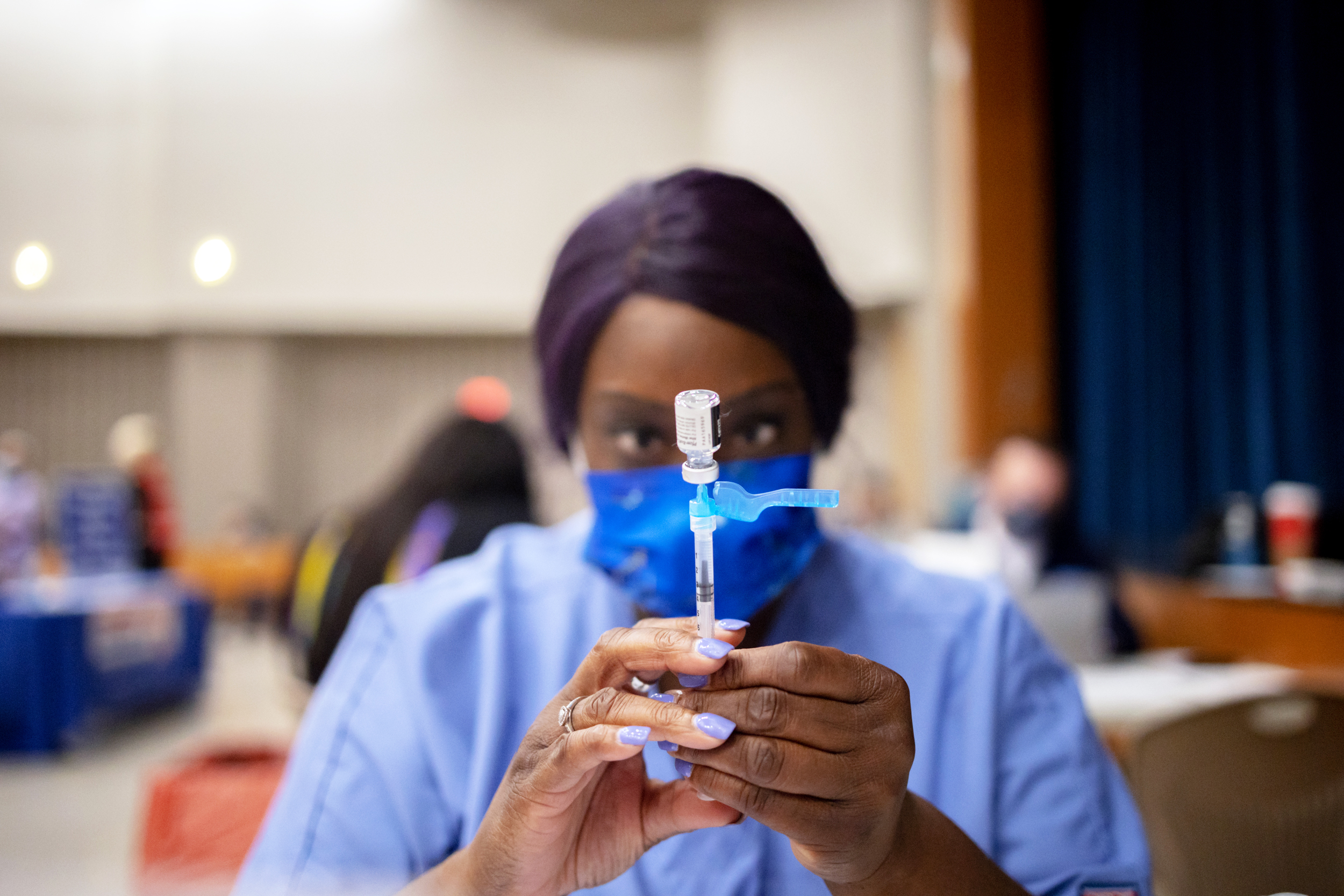 The decision Monday by the Food and Drug Administration to grant full approval to Pfizer-BioNTech’s two-dose vaccine pushed markets higher, boosting the Dow Jones Industrial Average by 300 points and propelling the S&P 500 and the Nasdaq to fresh highs. Investors appeared to express confidence the move could represent an inflection point for the economic recovery.

The boost could reflect expectations that full approval will increase vaccination rates in two ways: More vaccination requirements by businesses and governments, and a greater acceptance by the public.

President Joe Biden on Monday pressed private companies to mandate vaccinations, saying in a news briefing: “I’m calling on more companies in the private sector to step up the vaccine requirements that will reach millions more people. If you’re a business leader, a nonprofit leader, state or local leader, who has been waiting for full FDA approval to require vaccinations, I call on you now to do that, require it.”

Already, some employers have taken the approval as a green light for mandates. The New York City public school system — the nation’s largest — announced that all staff members must have at least one shot of the two-shot regimen completed by Sept. 27, and the Pentagon announced that all 1.4 million active-duty military members will be required to be vaccinated.

Some private-sector companies, such as United Airlines, Tyson Foods, Walmart and the Walt Disney Company had already required vaccines for some or all employees.

“I think some companies and state and local governments will all be feeling more comfortable in issuing vaccine mandates,” said Eric Diton, president and managing director at The Wealth Alliance, an investment advisory firm. “All of that is going to contribute to a higher vaccination percentage, which means a reduced impact of Covid and the delta variant, which should ultimately lead to a strengthening of the economy.”

Vaccine skeptics could find themselves increasingly isolated as more employers embrace mandates. The dismissal of a Texas court case and guidance from the Department of Justice had already emboldened more employers to impose vaccination mandates, said Michael Schmidt, vice chair of the labor and employment department and office managing partner at the law firm of Cozen O’Connor.

Today’s approval will accelerate that momentum, he said.

“For those employers who were still waiting for that issue to resolve itself, I think they’ll be more likely to implement mandatory vaccine policies,” he said.

The approval also paves the way for companies or organizations to require that customers be vaccinated. In particular, the stricken leisure and hospitality sector could benefit if Americans are more willing to travel, dine out, visit theme parks and attend in-person events, said Tuna Amobi, senior consumer analyst at CFRA Research.

With recent surging case loads due to the highly transmissible delta variant, the economic recovery many had expected at the beginning of the summer seemed to be growing more elusive.

“Up until really recently, the consumer has been a bright spot in the economy,” Diton said. “The consumer wants to spend.”

The FDA’s move could help the nation regain its footing on the path back to normalcy.

“With full approval and fears over the delta variant you’ve got a combo… that may help accelerate the number of vaccinations,” said Mike Bailey, director of research at FBB Capital Partners.

Bailey said that while the approval won’t win over die-hard vaccine skeptics, the upshot could still be millions of additional vaccinated Americans.

“I don’t want to say this is a black-and-white scenario,” he said. “I do think, on the margins, there probably are some portion of vaccine-hesitant folks that are waiting for this.”

A recent Kaiser Family Foundation survey found that nearly one-third of unvaccinated adults said they would be more likely to get the shot after the vaccine received full FDA approval.

“If, over the next month or two, they start that vaccination process, that would be dramatic,” Diton said. “It reduces strains on hospitals, reduces the death rate. It’s good all around.”

Although none of the available vaccines is currently available for children under the age of 12, vaccine mandates for teachers and school staff could help keep classrooms open, which could improve the employment picture among parents sidelined by childcare demands over the course of the pandemic.

“All these are building blocks that should help on the margins,” Bailey said, but he added that the virus remains a formidable and unpredictable foe. “It’s one piece of the puzzle, but it doesn’t change the Covid story,” he said.

“We are still a long way from achieving herd immunity,” Chris Zaccarelli, chief investment officer for the Independent Advisor Alliance, pointed out. “It will be a while before we are able to cross that threshold,” he added.

Zaccarelli added that while the public health implications are crucial, the improvement in consumer sentiment from greater vaccination acceptance and lower rates of Covid-19 is also a key factor in sustaining economic momentum.

“To the extent that the general public becomes more comfortable living with the virus — either because of increased vaccinations or natural immunity from recovered infections — the economy is likely to continue on its upward trajectory,” he said.