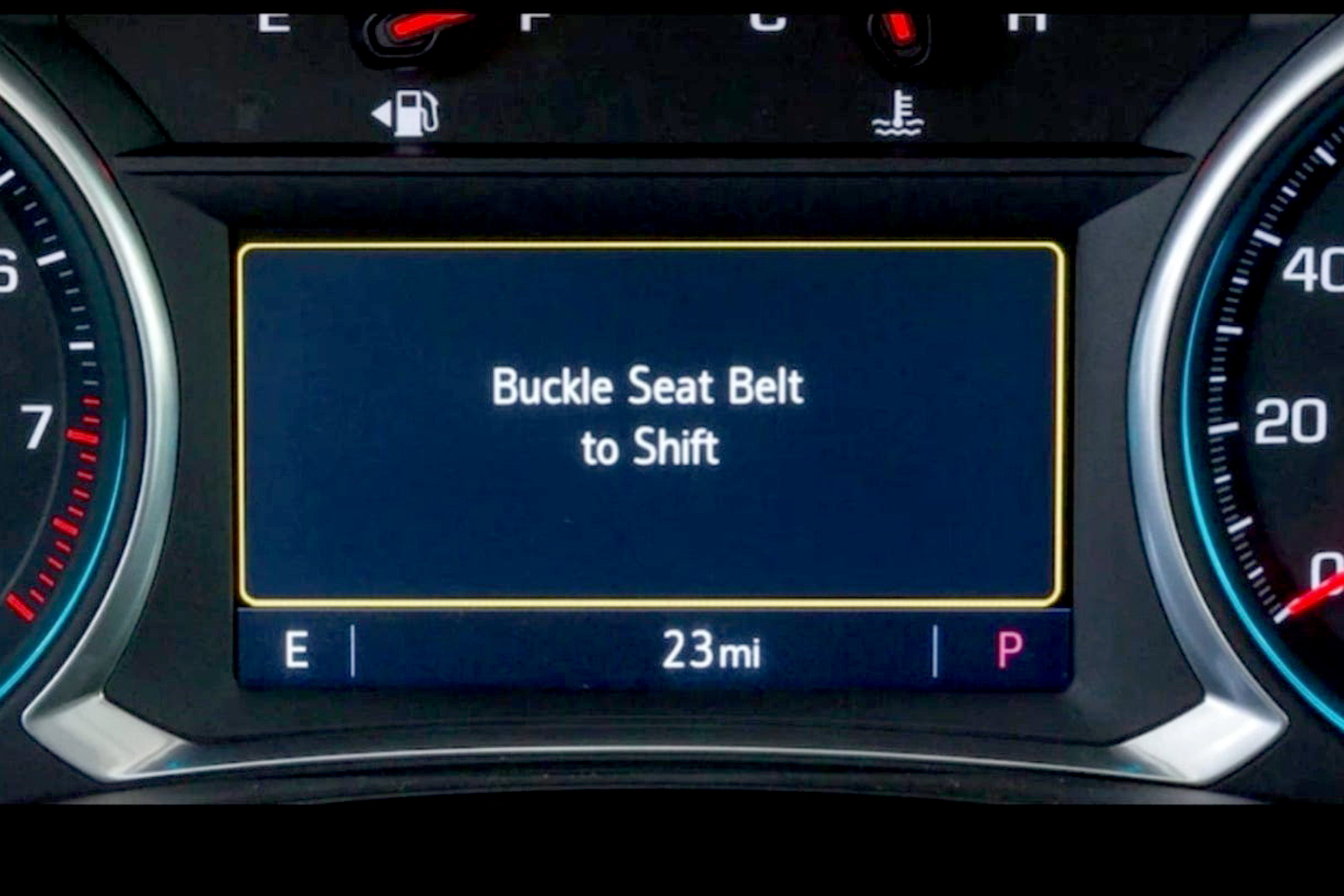 With highways deaths at a 15-year high, experts have pointed to a decline in seat belt usage — prompting safety advocates and auto manufacturers to look for ways to get people to buckle up again.

General Motors, for one, has dusted off an idea from the 1970s, introducing a new system that prevents motorists from shifting into gear until they’re belted up.

“The statistics show that of all the fatalities we see on the road, almost half are not wearing seatbelts,” said Tricia Morrow, a safety strategy engineer for GM’s Chevrolet division.

Chevy has been tinkering with ways to encourage drivers to buckle up for more than a decade. A pilot program was introduced on some vehicles sold to fleets in 2015 and resulted in a 16 percent increase in belt usage by drivers who irregularly used the safety devices previously.

For the 2020 model year, GM added the feature on retail vehicles including the Chevrolet Colorado, Traverse and Malibu models, as well as the GMC Canyon. It expanded the Buckle to Drive function to the Chevy Equinox and Blazer models last year, and will include full-size Chevrolet and GMC pickups and SUVs for 2022.

In the longer term, it will be “across the whole General Motors portfolio,” Morrow told NBC News.

For now, Buckle to Drive only activates when a vehicle is operated in Teen Driver mode, which puts other limits on a young driver’s behavior. Going forward, however, it will be active at all times, and GM has also “discussed” adding a requirement for front seat passengers to be buckled, Morrow said.

On the surface, the system is similar to the ignition interlocks federal regulators briefly mandated in the early 1970s. Back then, the driver’s belt had to be buckled before a car could be started. But the approach triggered broad criticism from those seeing it as government intrusion — complicated by a high-failure rate where even belted drivers couldn’t get their vehicles to start.

The new Buckle to Drive system lets a car start, but won’t shift into gear for at least 20 seconds, a delay Morrow believes will encourage more drivers to buckle up. Those determined to stay unbelted can wait out the system or turn it off using the Settings feature on their car’s infotainment screen.

Nonetheless, “GM deserves kudos for taking this step,” said Russ Rader, senior vice president with the Insurance Institute for Highway Safety. “Lack of belt use is one of our biggest unsolved safety problems.”

“Lack of belt use is one of our biggest unsolved safety problems.”

For all of 2020, 38,680 people died on U.S. roads, an increase of 7.2 percent when compared to 2019, according to formal data released in June by the National Highway Traffic Safety Administration. That was despite the fact that Americans clocked fewer miles because of pandemic lockdowns and a shift to working from home.

A variety of factors is implicated, including smartphone usage and other forms of distracted driving, as well as a sharp rise in highway speeds. But declining seat belt usage comes into play whatever the reason behind a crash, experts stress. NHTSA data show the number of fatalities involving unbelted occupants jumped by 15 percent from 2019 to 2020, and the number of deaths involving occupants thrown from a vehicle rose by 20 percent during that period.

How much seat belt usage has declined is unclear, though experts agree the trend has moved downward after climbing sharply over the decades. As recently as 2006, only 81.2 percent of occupants were belted, climbing to 90.7 percent in 2019. It dipped to 90.3 percent last year. At peak, an “observational study” conducted by NHTSA found that while 95 percent of drivers belted up late in the last decade, that number fell to just over 90 percent last year, Rader said.

GM isn’t the only automaker hoping to convince drivers to wear their seat belts. Federal regulations require vehicles to chime briefly when started up if the driver isn’t buckled in. But a growing number of brands have adopted more insistent chimes, buzzers and bells that continue to sound, even after the vehicle drives off.

Such “belt reminder” systems can be as effective as seat belt interlocks, Rader said. The IIHS will soon issue a list of vehicles with the best reminders — a move the safety group hopes will encourage other manufacturers to follow suit.

Paul A. Eisenstein is an NBC News contributor who covers the auto industry.